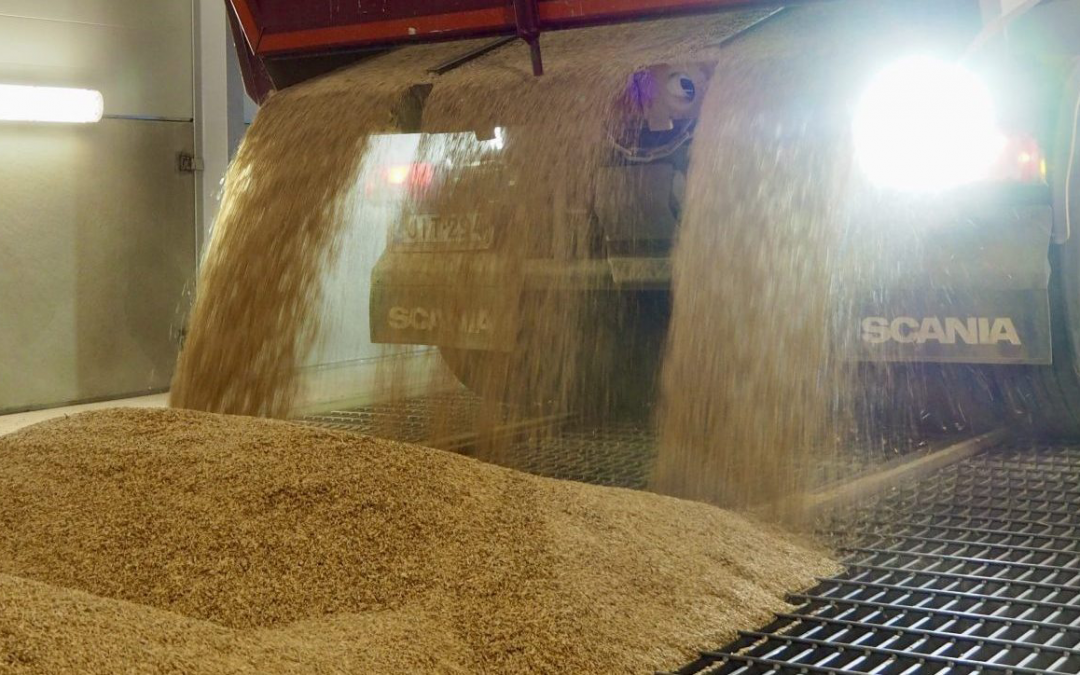 A new grain unloading station will strengthen Rauma’s grain traffic. During the autumn, Euroports and Suomen Viljava built a new unloading station in
the Rauma port area. A long, continuous railway line and the cooperation of two experts in their respective fields ensure the cost-effective transport of grain from Russia to Finland. The capacity created by the cooperation is estimated at around 200,000 to 250,000 tons of grain per year.

In the autumn, a new hall was built at the port of Rauma on the shore of Pikisaari. The hall is a grain unloading station, which was built on the basis of cooperation between two parties operating in the area, Euroports Rauma Oy and Suomen Viljava Oy.

The construction project started in October and the infrastructure was completed in accordance with our goal at the turn of the year. The last installation work and test runs were carried out in December, after which it was time for commissioning, says Janne Virta, Commercial Director of Euroports. The first steps towards the cooperation were taken after the summer at the initiative of Euroports.

Vast quantities of grain are transshipped from Russia to Finland and then shipped forward to different parts of the world. Based on this, we started to think about a possible service concept and contacted the VR Group responsible for grain transportation. They advised us to contact Suomen Viljava. The next day, Pasi Lähdetie, CEO of Suomen Viljava, received a phone call from Virta.
Even though both parties have been operating in the same area for decades, there has been little cooperation. Virta’s call came at a perfect time. We had been thinking for a long time how we could unload grain wagons in Rauma. About 20 years ago, we still had a railway connection to our warehouse, but now that we no longer have it, we haven’t been able to find a cost-effective solution that works for us, says Lähdetie. Together with Janne, we went through different options on how to unload grain from hopper wagons. For example, we discussed lifting the wagons with cranes, but very quickly realized that it was not a viable option. Euroports’ private railway, which met the required dimensions, came up as the best solution. After that, the process began to proceed rapidly, but in carefully planned steps.

Suomen Viljava has extensive experience in the technology used at this unloading station and the related processing systems and equipment. We planned the facilities and grain transfer processes together, says Virta.

Suomen Viljava’s operations in Rauma are based on the reception and storage of grain, as well as ship and lorry loading. The grain cargo ships head all over the world, from the Baltic Sea region all the way to Africa, Asia, and the United States.
Rauma has 60 silos of different sizes with a total storage capacity of 125,000 tons. We process varying quantities of goods each year, depending on the domestic harvest, but on average about 200,000 tons of grain are transported via us annually, says Lähdetie. Suomen Viljava handles and stores grain and grain by-products in 17 different locations. A concept similar to the unloading station now built in Rauma is already in use in Loviisa. Lähdetie mentions Rihtniemi’s 12-metre-deep fairway as one of its key strengths.
When the fairway was deepened, we installed a new-generation loader for loading larger ships. Last winter we had a lot of good experiences with its operation. Our warehousing operations in Rauma run smoothly and efficiently. The shore of Pikisaari was chosen as the location for the grain unloading station. In addition to the long, continuous railway line, it is important that the wagons do not interfere with other operational traffic in the port.
The wagons come from Russia as a so-called block train, i.e. one train may consist of more than 40 wagons. It is important that we get the wagons in the longest possible line to their own unloading track, from where they can be transferred for unloading. This is the best option in terms of efficiency, says Virta. The infrastructure and functionality were designed and implemented in such a way that we can unload at least three wagons per hour. This means that we can unload an entire train in one day, that is, in two shifts. The efficiency of logistics plays an important role from transportation to warehousing. In Russia, full trains run through express lines, and VR pulls them from Vainikkala, so they travel quickly from Russia to Rauma. This ensures a short turnaround time, which is very important for Russian wagon operators, says Lähdetie.

The practical day-to-day work of the cooperation will start within the beginning of the year when the first train carriages arrive for dismantling. Euroports will be responsible for unloading wagons and cooperation with VR, which includes, among other things, shunting operations.
We will unload the wagons, and Suomen Viljava will take care of the transfer of the product to its warehouses and onwards. At the management level, we intend to collaborate closely, for example, on the schedules of trains and different work phases, says Virta. Grain is a seasonal product, and many activities are determined by the grain market.
We are talking more about seasonal than regular traffic, but either way, we have enough capacity. According to a preliminary estimate, the capacity created by this cooperation would be around 200,000 to 250,000 tons per year in addition to domestic goods, says Lähdetie.
Our collaboration has been completely seamless throughout the design and construction phase. We have similar views, and the expertise of both parties complement each other.
Euroports has strong construction expertise under the leadership of Arto Suvanto, while we are experts in grain machinery and equipment.